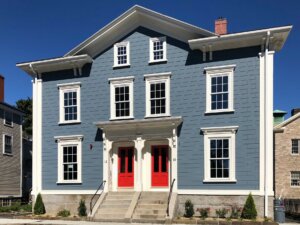 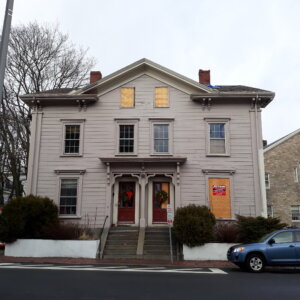 In a historic city like Salem, even with modern advances in communication and equipment, the word “Fire” sends shivers through the community. Many in Salem remember the fire at 10-12 Lynde Street several years ago. There was first a deep concern for the residents and then for the building itself, one of the few remaining grand houses of Salem’s past that exists in the downtown core.

The building was originally built in 1858 as a duplex but was converted into a 12-unit rooming house in the 1930s or 40s and was purchased by patriarch George Ahmed in the 60s. After the fire the Ahmed family decided they would take on the task of a beautiful reconstruction.  After assembling a team that included Seger Architects, Epsilon Associates and Groom Construction, they began working through issue by issue that had been created by the devastation of fire as well as the slow decay of time.  The team made decisions with the long-term stability of the building in mind. For example, rather than hide some settling and sloped floors with interior plaster and trim we raised up the half of the building whose foundation had sunk by 4”, other structural work included carefully place steel beams. Electrical, plumbing, insulation and roofing were also added and updated.  The improvements that can’t be seen are often those that will bring a building through this century and into the next.

By using the attic and basement that were previously empty, the completed project created nine 1- and 2-bedroom rental units.  The shape and volume of rooms were maintained or restored, as were historic materials. Highlights include the restoration of Marble fireplaces and the careful removal and measuring of the original, rotted and burned siding before it was re-milled to match the exact dimensions of each board and replaced.

Lynde Street has an interesting mix of building styles with 10-12 Lynde now anchoring the street as a result of the care taken in this restoration.

*This project was awarded State and Federal Historic Tax Credits