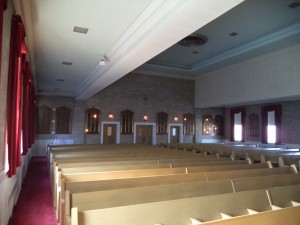 In early 2014 local developer Salem Renewal LLC proposed an adaptive use of the former Temple Shalom Synagogue to a satellite campus for Salem State University. The campus, being in close proximity to the former synagogue, expressed interest with the proposal as the home for the School of Social Work and International Programs.

Seger Architects, teaming with a higher education consulting architect Jones Architecture of Salem, MA, generated an initial program and schematic design for SSU which satisfied their program needs and kick-started the implementation of the exciting new life for this soon to be abandoned structure.

Implementation involved a number of creative modifications to the building including; inter-flooring of the main sanctuary for office space and creating full accessibility via a five-stop elevator which serviced disparate levels between the front and back of the building.

The existing building, with its large sanctuary and lower equally large function hall spaces, lent itself to creating spacious classrooms, open student lounge areas, and faculty offices accommodating the needs of the University. Much of the interior woodwork and existing finishes were restored and were complimented by the interior finishes proposed by Betsy Ricciarelli Interior Design of Salem, MA.

Restorations to the exterior included the façade masonry and woodwork restoration, complete window replacement and energy upgrade, and the introduction of a landscaped courtyard, which included an integral accessible walkway leading to the main entrance of the building.

The school opened on budget and on time for the 2015 fall semester and has been well received by both the University and the City of Salem.